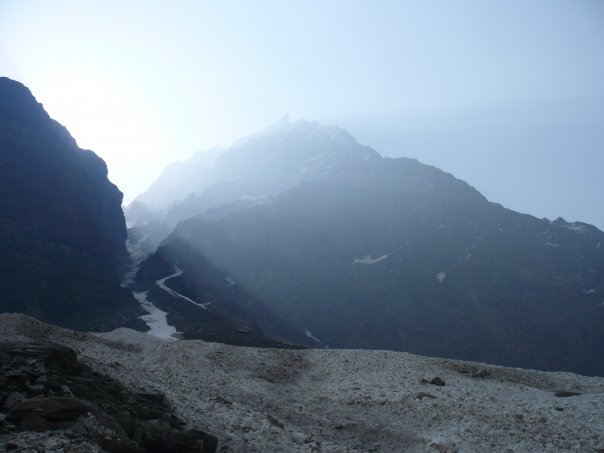 The hike from Khati to Dwali is one of the most languid and social hikes I’ve ever done. Every few minutes, our progress would be hindered by some acquaintance of D trudging along the path entertaining him with gossip and conversation. There were friends, guides, horsemen, pandits, old people, so diverse were the people we came across that it was hard to believe there was anyone left in the world who didn’t know D.

Two women, distant aunts of D, provided the most enjoyable company. They were on their way back from the forest with big baskets of wood on their backs. When they saw us, they took a break and began making tea with hot water from a big flask and tea powder. Both women had a lot of fun at D’s expense, dredging up the silly things he did as a kid – stealing chicken from the neighbours farm, wrecking giant cobwebs in the house and putting the spiders inside his mouth, annoying other girls his age by pulling their hair etc.

D soon had enough of this teasing and said we had to get moving quickly or our legs would get swollen up with all the rest. The women mocked him saying that was the randomest excuse they had ever heard and asked me not to worry because even the slowest of walkers walked to Dwali in under 3 hours. So we had more cups of tea and more conversation.

I told them that Khati was the most beautiful village I had ever seen and that nothing appears to have changed in a hundred years. The women shook their heads in disagreement. It wasn’t the village it was, they said. Back in the 70s when they grew up, only the hardiest of mainland Indians or foreigners ever made it to the village and when they showed up, it felt as if they had come from another world. But now, so many came every day that the surprise and the shock of seeing people from other cultures had dwindled to nothing. Even the language barrier didn’t exist anymore because most people had learnt to speak Hindi. People were more content back then, they said. Hardly anybody had money and while life was hard, they had everything they needed to survive. But now, thanks to tourism and easier access, everybody worked for money and no amount of money was ever enough. I could have talked to the women all day long, probing deeper into their history but we had to get moving if we wished to reach Dwali soon and I bid them a sad goodbye.

The most pleasurable section of the walk to Dwali was by the bright green grassy banks of the Pindari river. It was an ethereal faeriland with butterflies of myriad colors flitting by and scarlet minivets adding a touch of bright red to the landscape. Much to D’s annoyance, I took inordinately long breaks here to just sit by the river and watch it flow. On one of these breaks, D confessed that he had once fallen in love with a Gujarati girl from a group that had hired him for the trek. Even though he was a married man, he thought about her every single day, he said. He wrote long letters to her to stay in touch and was enormously happy when she replied to a few of them. It was a bittersweet happiness as it also made him feel guilty and sinful for loving another woman more than his wife. Having married at the age of 18, he felt trapped at having to lead a life he hadn’t chosen. He couldn’t run away from his village and his family because they were the only tangible things in the world that he had and without them, he would feel painfully lost.

By the time we crossed the wonky suspension bridge to reach the Dwali Tourist Rest House, it was 4 pm. I was delighted to be at the end of a beautiful day of hiking and looked forward to spending the rest of the evening with umpteen cups of tea staring at the mountains in front of me. But these alluring thoughts would prove to be delusional. The Dwali TRH was swarmed with a mighty group of kids from an International school in Pune. They had taken up all the accommodation and the place was so small and beds were in such short supply that there weren’t enough of them to accommodate the gargantuan support staff of guides, teachers, porters, rescue specialists, horsemen and random hangabouts.

The manager stormed out and admonished D for taking such a long time to get there. He was terribly angry and advised me to cut his fees for the day because it was his duty to get there early and book a place for his client. If we had gotten there merely two hours earlier, he might have found a corner for me to sleep in. But now it was too late. What took us so long anyway?, he asked, arms flailing about. It was such a short, easy hike! I told him, smiling sheepishly, about the many breaks we took on the way to enjoy the bounty of mother nature. He replied scornfully saying, “That’s good then. It’s good that you like nature because there’s a lot more nature ahead of you on the way to the rest house in Phurkiya. I’m sure you’ll enjoy it,” and stormed back in to entertain the army of children.

The hike to Phurkiya was everything the walk to Dwali wasn’t. The terrain was relentlessly uphill and steep. Because it was late in the evening, many of the icy stretches on the higher slopes were melting resulting in stretches that were seriously slippery. The hike was made even more treacherous as we had to hurry up to make it to the TRH at Phurkiya before it got dark. After a point, the jungles, the trees, the meadows, anything green that grew, disappeared from the landscape leaving us a barren rocky wilderness punctuated by the hardiest of shrubs that thrived in this inhospitable climate. Little clumps of high altitude wildflowers were just beginning to sprout. D said I should come back a few months later when the entire hillside turned into a bed of color after the flowers bloomed in the monsoon.

As we neared Phurkiya, the oxygen in the atmosphere gradually thinned, the air became colder and my head felt lighter. There were stretches where the snow was so deep that when my foot hit the surface, it sank to the knee. The last rays of the sun were angling across the jagged peaks in the distance and as the light grew dimmer, the mountains wallowed in a deep blue. It was mesmerizing to watch but I had no time to take in the landscapes at leisure as we had to hurry up and get to Phurkiya before it became completely dark.

When I reached the TRH in Phurkiya in April 2009, it was the remotest outpost I had ever been to. At the time I felt it was astonishing that it even existed. A lone structure looking over a mountainous wilderness close to one of the edges of the Himalayas. There were cascading trickles of meltwater falling down the mountains on the opposite slope and the whole area was desolate save for myself, D, the caretaker and AR, a solo trekker who would be my companion for over a week from here on.

It got dark and cold very quickly and all of us huddled together in the kitchen shed to take refuge by the fire. The caretaker delivered us a simple yet sumptuous meal of dal, roti, vegetables and bottomless cups of chai as we made conversation. AR had quit his job to travel and had been trekking alone for the past few days. As two people who had momentarily given up a secure life to wander aimlessly, we connected immediately.

But kitchen fires don’t burn forever and we had to get out of the warm confines of the shed and venture out in the sub zero cold to our rooms to catch some sleep before another long hike the next morning. AR and I were given two mattresses and a mountain of quilts to sleep inside a dark and dank little room. The night was so cold that even though I had all my clothes on and about three heavy quilts over, I was still shivering to the bone. I looked at the time. Five minutes short of 10 pm. It was going to be a long night.