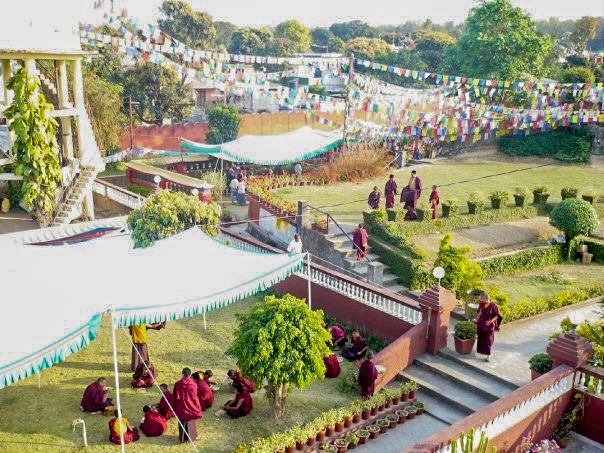 I was woken up at 7 in the morning with loud knocks on the door by the man at the reception. “Saab aaye hain aapse milne (A gentleman has come to see you)”, he said with a huff and left. I didn’t know anyone in Dehradun let alone “saabs”, so I thought it must be a misunderstanding and went back to sleep. After two minutes, he banged the door again and said angrily, “Kaha naa saab aaye hain? Chaliye jaldi. (Did I not tell you a gentleman was here for you? Come quickly!)” This was annoying and highly perplexing.

When I went downstairs, the man who was waiting for me (let’s call him JD) greeted me warmly and scolded me for staying in a cheap hotel when I could be living with him. He was a close family friend but since I was habitually anti-social when it came to family, I hadn’t seen him in a long time and had absolutely no idea that he lived in Dehradun. Apparently, my mother, in a state of panic after reading the e-mail about my lost phone, had called him up and asked him to take me home. I had a rather strict “no meeting friends or family on the road” rule but after 3 weeks of bad hotels, toxic food and exhausted wanderings, I wasn’t unhappy to go live in a sheltered environment for a while.

He was extremely polite, humble and mild-mannered for someone who was a high-ranking officer in the Indian Navy. But I could get a sense of his stature when a bike, in an attempt to overtake his car near a signal, grazed the bumper at the back. The biker couldn’t dodge the signal, so when he stopped, JD got out and censured him viciously. He was not a big man and was a lot smaller than the man who was riding the bike but with his fierce eyes and booming voice, he intimidated him into apologizing for his careless driving. “Fucking bastards,” he said after returning to the car, “these people think they own the world.”

Mr. and Mrs. JD (whom I shall henceforth call Aunty) treated me with extreme kindness and warmth. Their son was away on Merchant Navy duty and their daughter was studying in college and they gave me all the attention they could. Aunty put up with my idiosyncrasies like throwing stuff around all over the house, waking up at noon, not taking showers for days, mixing up clothes in the washing machines, carrying dirty shoes into the bedroom, forgetting to switch off fans and geysers etc. with a great degree of tolerance. Living with them, I realized how much I missed a close family setting despite the freedom and excitement of the traveling life.

The house was in the National Hydrographic Office campus on Rajpur Road, as serene and peaceful as the rest of Dehradun was noisy and chaotic. JP gave me an idea of the degree to which the city had changed over the years. Three decades ago, when he was here as a junior officer, he had to walk the 3 kms to Central Dehradun every day in pitch black darkness during the night. There was nothing but thick forests on the way on both sides of the road. It’s a scene unimaginable today with shopping centers, restaurants, residential buildings, street lights lined up all along Rajpur Road with not a hint of greenery to be seen anywhere. Development work, it seems, went into overdrive after the city was declared as the capital of the newly formed state of Uttarakhand in the year 2000.

Dehradun was a smallish city, so public transport was restricted to 8-seater rickshaws aka vikrams that plied on fixed routes. It was an uncomfortable yet cheap way to get to some of the tourist areas on the outskirts of the city. On one of these trips, I heard two young boys in their 20s talk about how difficult life was for them in Dehradun. “These bloody Tibetans get everything on a platter,” said one of them with rage plastered on his face, “and they are not even from India. They have never been to college but they get shops, markets, jobs, momo restaurants, everything, while we Indian people get nothing.” They were Economics graduates from the Doon University but had been waiting for a job to come by for over 6 months.

“They don’t have a country anymore,” I said, “and they had to build a life out of nothing when they came here. At least you have a family that supports you and a place you can call home.”

“If they didn’t have anything, they shouldn’t have come here. They should have learnt to live under China,” the other boy said. “They are a very crafty people, only wanting to make money. They already have a lot of things for free, so why are they so obsessed with money? People think they can get cheap clothes at the Tibetan Market but that’s not true. They always sell at a profit.”

The angrier boy then cut in saying, “Why are you taking their side anyway? They are not our people. You should be supporting young people like us.”

Realizing that this was an intensely emotive issue at least among the two boys sitting in front of me, I chose to end the discussion by nodding my head in agreement and staying quiet the rest of the way.

All this talk of Tibet made me hungry for momos and since the Tibetan market was very close to the rickshaw stand, the last stop on this journey, I promptly went into the first momo shop I could find after getting off. It was a little shed with a makeshift tin roof, dirty floors and cobwebbed ceilings. The woman seated next to the momo steamer evinced little interest in selling momos but after she was lazily poked in the back with a leg by another woman taking a nap on the bench reserved for customers, she moodily went about the arduous process of taking orders. She had only three options, veg, chicken and mutton. Since I was very hungry and momos tend to be terribly light, I ordered one of each.

The momos weren’t as juicy as I would have liked but they sated my hunger. While eating, I talked to the woman who turned out to be friendlier than first impressions suggested. I told her about the conversation I had with the two young boys in the rickshaw and she said, yes, the perception the boys had was very real and every once in a while some of these boys would come up to Tibetan-run shops and abuse them out of frustration. But these instances of verbal violence were a minority, she said, and most of the people in the city were friendly and they let them do business in peace.

Her family was originally from Amdo, the region where the present Dalai Lama came from. After continued repression in the 1980’s, her father crossed over into Nepal with her mother. She was born in the Tibetan colony around Pokhara and when she was five years old, the family moved again to India where the prospects appeared to be much brighter. They now lived in Clement Town, a large Tibetan settlement with a big monastery and she urged me to visit it whenever I had the time. It was the only worthwhile thing to do around Dehradun, she said. People accused Tibetans of being rude while selling goods in the markets but according to her, they didn’t realize that people like her father who ran the shops had neither the training nor the aptitude for the business. They were pastoral nomads and had been so for over a thousand years. Many of the people running the shops were old men and women who had never transacted business and had been uprooted from their landscapes and livelihoods and thrown into a world where they didn’t feel they belonged. She broke into tears at this point and said that she’d never desired to see the land her ancestors came from but her father, even after spending over 20 years abroad, kept longing to go back and wouldn’t stop pissing her off with his nostalgia.

The Mindrolling monastery in Clement Town was the first Tibetan monastery I ever went to and I was completely overawed by the setting, the atmosphere, the scale, the repeated drone of “Om Mani Padme Om” humming in the air and the colourful, macabre, spellbinding wall paintings filling the rooms. Surrounded by Mahakal with his crown of skulls, Hayagriva with the neck of a horse, Yamantaka signaling doom and death and graphic depictions of gruesome punishments meted out by wrathful deities, it felt odd and surreal to feel so peaceful and tranquil around that space. In the evening, the deep bass of Tibetan woodwinds signaled the culmination of evening prayers and a cacophony of arcane chants rumbled through the prayer hall. I, for one, was happy that the culture, however uprooted it may have been from its origins, was alive and kicking here in India.